Though the Annual CAC Exhibitions are currently titled “Annual Gold Medal Juried Exhibition,” they weren’t always referred to by that name. Previously, the annual exhibitions were typically referred to as “The 37th Annual Exhibition,” or “Exhibition of Painting and Sculpture.”

The California Art Club was founded in mid-December of 1909, but the 1st Annual wasn’t held until early 1911, with the 2nd Annual following later that same year. This brief pause explains why the current exhibitions do not sync up with the year (i.e., the 100th Annual won’t occur in 2009, but in 2011). The 84th Annual is the only known year (1993) an exhibition was never held, apparently due to lack of a venue.

Historically there have been many various and colorful awards given at the Annual Exhibitions: Best Landscape, Best Sculpture, Honorable Mention, etc. [16th Annual]; The Minnie Tingle Memorial Prize, CAC Medals for Painting (Gold, Silver and Bronze), CAC Medals for Sculpture (same), [17th Annual]; The Eudora Hull Spalding prize of $200, The Fletcher Ford Purchase Prize of $100, The Dalzell Hatfield Gold Medal for the painting contributing most to the success of the exhibition, and carrying with it $50 [21st Annual]. Many awards were given in someone’s name, and for subject or medium categories such as Figures, Portraits, Graphics, Watercolor, Marines, Landscapes, etc. [73rd, 78th Annuals, etc.]. Awards changed from year to year. Some years also saw a Best of Show award.

Following is a chronological list of known CAC medals along with their creators.

A gold medal (“five bronze medals plated with 24K gold”) was designed by sculptor and CAC Member Henry van Wolf (1898-1982) and presented to the Club at their January 1950 meeting. The winners at the annual CAC Spring Show at the Greek Theater (Feb. 12 – 26, 1950) were the first to receive this medal.

Shortly after the first medal Van Wolf designed another, this one in memory of CAC member and sculptor Edgardo Simone who had passed away in 1949. This medal was awarded as “the Popular Prize for Painting” to Artist Member Leon Franks of Laguna Beach at the following annual CAC Spring Show at the Greek Theater (Mar. 18 – Apr. 1, 1951). Innocenzo Daraio won the CAC Medal, while Lewis Physioc took home a medal made by Philip Paval.

A competition was announced in Dec. 1950 for sculptor members to come up with a new medal design, to be awarded at annual exhibitions. It is unknown if this ever came to fruition, although two other medals, by Van Wolf and Paval, are awarded at subsequent Spring Shows.

CAC Gold Medals, designed by Van Wolf and reproduced on the [missing] catalogue cover were presented at the Annual CAC Spring Show at the Greek Theater (March 16 – 30, 1952). Unknown if these are the same Van Wolf medals made earlier or not. The Popular Award for Painting was won by CAC President Charles Argall. 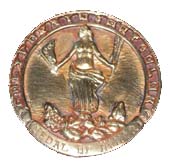 Bearing the inscription “Medal of Honor,” this medal was designed and executed c.1953 by Philip Kran Paval (1899-1971), 24th CAC President (1953-55). “A new Special Medal of Honor has been designed by Philip Paval and will be presented this year for the first time to the winner of a special competition among former 1st prize winners at our CAC Greek Theater show.” [New Medal, March 1953 CAC Bulletin, Vol. 12 No. 7]

This medal was later awarded in 1954 to Sir Winston Churchill when the statesman was invited by Paval to join as an Honorary CAC Member. Churchill’s medal now resides in the Collection of Chartwell House in the U.K.

The most recent medal was designed c. 1978 by Leo Nowak (1907-2001), a CAC member who served in a number of capacities including Vice President. The Nowak medal has been awarded at Annual Exhibition since its creation, up through the 99th Annual [2010]. Both the Paval and Nowak medal designs have been reproduced on CAC Membership Rosters and Bulletins.

The June 2001 issue of the California Art Club Newsletter, in an article titled “Celebrating the 91st Gold Medal Juried Exhibition,” contains a section regarding the history of the gold medal which (mistakenly) reads:

The medal itself has an interesting history. It was created by artist Philip Paval, who was President of the CAC from 1953 to 1955. Born in Denmark and educated as a gold and silversmith, Paval settled in a Hollywood art studio and promptly led an active art career and scandalous social life. He was known to cohort with various movie actors, opera singers, European royalty and ambassadors. With quite a flair for the extravagant, he painted and sculpted prolifically for his clients and acquaintances. In his autobiography, Paval, published in 1968 by Gunther Press, he describes the medal he created: “I got the commission to make some medals for the Club. I never won one, but I still made them…“

The above quote was taken out of context. Reading the preceding paragraph of Paval’s book, it becomes clear that it is not the California Art Club that he is referring to, but rather the “Painter Sculpture Club” [i.e. the Painters and Sculptors Club of Los Angeles, founded 1923], of which he was also a member. To wit:

We always went out on Saturdays to paint; sometimes the California Missions and sometimes to San Pedro where we painted boats. My painting at San Pedro was the one accepted in the Painter Sculpture Club exhibition. Stewart Robson was the president and I spent many evenings there.

I gave a lecture at the Club and as I was gradually getting well known in the field of silversmithing, I met many of the Southland’s painters there. The first time I was accepted in the Club, I had to cook a dinner; a friend and I cooked a spaghetti dinner with red wine and all. I met artists such as Paul Sample, Thorwald Probst, Ralph Holmes, Ejnar Hansen, Peter Nielsen, Art Yoman and many others. Earl Stendahl, the art dealer, was always ready to let us meet at his gallery. I got the commission to make some medals for the Club. I never won one, but I still made them and kept the original which I later gave to Benton Scott as he had won one but never received it.

Philip Paval did create a gold medal for the CAC, but it is not mentioned in his autobiography. As the excerpt below explains, the medal that the CAC currently uses was designed and created in fairly recent history. A note in the December 1991 issue of the California Art Club Bulletin (later retitled the California Art Club Newsletter) explains this:

We want to acknowledge a nice gesture from Leo Nowak, an Honorary Life Member who now resides in Inyokern. Leo designed the CAC Medallion for the 1978-79 Roster and Bylaws, and that we use this on our bulletin. He noted that the logo was looking faded from repeated reproductions, so he kindly sent us his original print. We will use it when we make up new letterheads in the near future. Leo also sent CAC a check to help with the cost of postage in mailing bulletins. Thank you for your generosity, Leo.

A new Gold Medal of Honor was adopted in early 1960 and the CAC voted to have Winston Churchill receive the first one struck. Designed by Philip Paval, it was later used on the cover of the 1984 Roster, with slight modifications (below; “Medal of Honor” is changed to “Since 1909”). 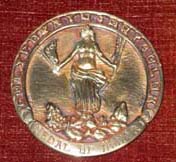 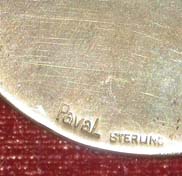 The Gold Medal given during this period was also designed by Paval. It was received by painter Robert Schaar (1969) and sculptor Angie Whitson (1977). 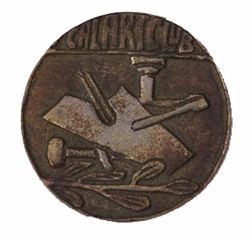 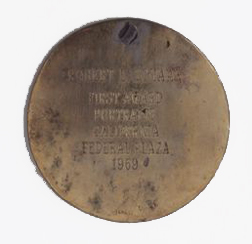 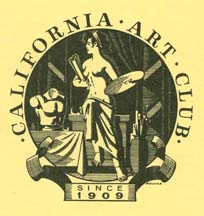 Cover and frontispiece of Who’s Who in the California Art Club, Inc., Roster and By-Laws 1984, 75th Anniversary Edition.

[Paval was actually the 24th President during those years.] 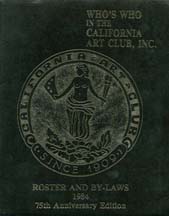 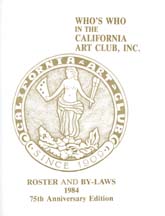 Top portion of the California Art Club Bulletin and detail of the Paval’s medal design. His design was used on the Bulletin from 1984 through February 1990; the following month Leo Nowak’s design replaced it. 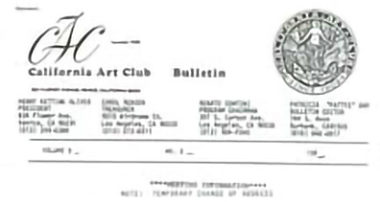 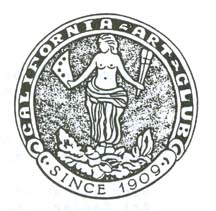 Top portion of the California Art Club Bulletin and detail of medallion, December 1991 issue. Features a new crisp reprint taken from Leo Nowak’s original print. His signature appears under the lower right portion of the medallion. This design is first seen on the March 1990 issue of the CAC Bulletin. 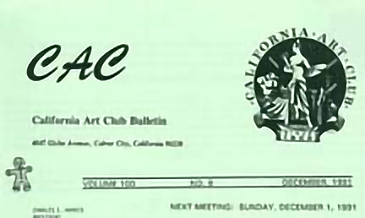 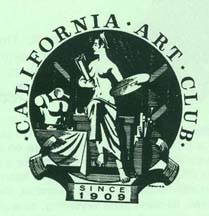 Detail of the Gold Medal Award which is currently given at the California Art Club’s Annual Gold Medal Juried Exhibitions. The details of this medal match Leo Nowak’s design exactly. 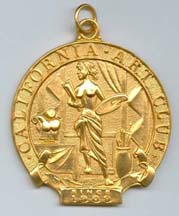 Was there an actual gold medal awarded in earlier exhibitions like the 17th Annual [1926], where CAC Medals for Painting and Sculpture were given in Gold, Silver and Bronze?

Same for the 58th Annual [1967] when “Gold Medal” is included in the title of the for the first time?