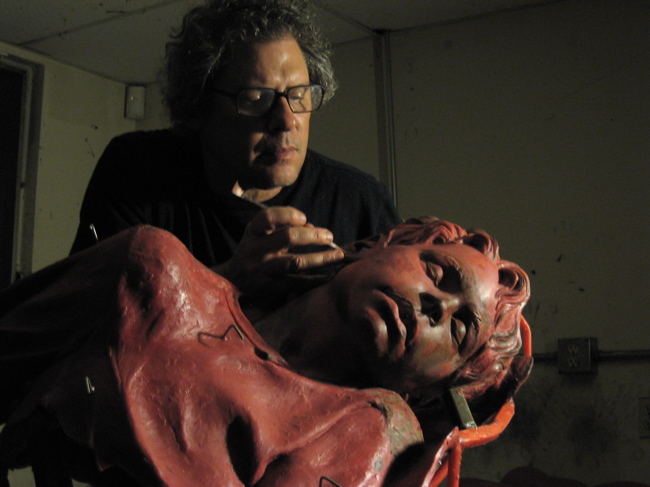 Since his early childhood, Christopher Slatoff (b. 1953) has seldom gone for more than a few day without sculpting. His early enthusiasm in sculpture won him several youth art competitions. His father, Howard Slatoff, was an artist, University Art Professor, and later Dean of Men and Chairman of the Art Department at California State University Hayward. His father’s PBS television program, Eye of the Artist, garnered a young Christopher Slatoff an unprecedented awareness of the artists and art movements of the day.

Slatoff’s formal education included a year in France at the Ecole des Beaux Arts and the Faculte d’Letres of the Universite d’Aix- Marseilles. In 1978 he received a Bachelors of Fine Arts, Sculpture from California State University Long Beach. During the mid 1970’s Cal State Long Beach was one of the few universities that specialized in Life Sculpture, and he would return to Long Beach State to teach Life Sculpture and Mold Making/Fabrication from 2005 to 2008.

Though raised in the abstract and conceptual art traditions of the mid 20th century, Slatoff was always focused on the human figure. Los Angeles in the 1970’s was the perfect environment for a young artist to explore new materials and fresh ways of depicting the figure.

As Christopher Slatoff’s style progressed, he turned to public art. He specializes in monumental sculpture for universities and churches. One of his latest pieces is an 8 1/2′ monument of Judge Robert Maclay Widney (1838 – 1929), the founder of the University of Southern California. He has also created large scale monuments for Pepperdine University, Fuller Theological Seminary and the Port District of San Diego. His Liturgical sculpture includes artwork at both the new cathedral of Our Lady of the Angeles in downtown Los Angeles, and the oldest church in Los Angeles, Nuestra Senora Reina de los Angeles. In 2012 he created the 13′ crucifix at the new USC Caruso Catholic Center. Additionally, Slatoff collaborated with celebrated science fiction writer, Ray Bradbury, in the creation of an 8’ bronze sculpture, Illustrated Man.

Currently, Slatoff teaches at Art Center Collage of Design in Pasadena, as well as lecturing and teaching workshops at both the Getty Center and the Getty Villa. He is Sculpture Chairman of the California Art Club and Artist in Residence at Fuller Theological Seminary. In the summers he teaches in Orvieto, Italy as part of Fuller’s Art and Theology Master’s Program. Slatoff is also committed to art education for underserved communities. Besides helping to set up several after-school art programs, he worked as an artist facilitator at Metro State Hospital. In 1986 he received an Artist in Residence Grant from the State of California to work with special needs children in public schools.