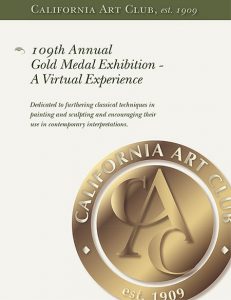 Presented in Collaboration with
Hilbert Museum of California Art at Chapman University
May 16 to June 30, 2020

All artwork is available for acquisition. For purchase inquiries, email goldmedal@californiaartclub.org or call (626) 583-9009. See Terms of Sale.

"Window Into is an exploration of contemporary urban living and the relationships I have with the people around me. The viewer is placed outside, physically distanced from the woman in the room, and yet her gesture and body language allows one to feel a kinship with her. My empathy creates narratives around her, drawing from my own lived experiences, leaving me feeling connected and alone simultaneously."

"The intent of this painting was to capture the mood and unique air quality of the city of San Francisco. A mixture of sun and fog creates a 'lost and found' quality on the streets and buildings below."

"During a late afternoon stroll in an exotic old neighborhood of Shanghai, this view of a walking bridge illuminated by the light of a restaurant stopped me in my tracks. The splash of gold light in an otherwise dingy scene was striking, and I thought the mirror reflection created an interesting shape and kept the eye traveling over and under the bridge. The counterbalance of the light in the window added interest to the right side of the painting."

"I always zoomed past this view at about 40 mph with the intention of someday checking it out for a painting. The day came last summer when I did a plein air study. The excitement of encountering such a striking scene and the resulting butterflies in my stomach implored me to create a studio version. Missing from this painting is the sound of zooming cars passing to the right and left. In a scene that seems mundane and devoid of interest to most, a world of surprising possibilities and beauty exists for others. The allure of urban."

The Bridge at Newport Dunes

"This scene caught my eye while walking our dog last October at the Newport Dunes Resort. I stopped in my tracks to appreciate the glow that radiated from the morning sun onto the skyline beyond, warmth bathing the space between where I stood and the tall buildings. The bridge served as a path for my eye to travel from where I stood on an ordinary path to all of that deliciously sunlight bathed distance. Three morning walks to this bridge later, The Bridge at Newport Dunes was born."

"The longest light is found in Los Gatos, the perfect location and intersection to capture the drama of a backlit urban scene. Sometimes life provides a moment to pause and breathe before we continue."

"As a kid growing up in Southern California, Bakersfield was just a place where we got gas while driving through to Yosemite. All I knew about the area was that there was a lot of oil, cows, almonds, tweekers, and trains there. I am always up for a challenging location to paint, so when I was invited out there for a show, I went! Who knew “Bako” had such a cute little downtown to paint and an abundance of trains. Some of the rail cars had graffiti on them and that is what I painted."

"Filbert Street in San Francisco runs from the top of Telegraph Hill, across North Beach, and ascends Russian Hill. It is punctuated by the spire of Ss. Peter and Paul Church. A former resident of North Beach, I have long been intrigued by this unique perspective and painted it several times. I try to capture San Francisco’s unique quality of light as the fog begins to roll in during the late afternoon."

"I have always admired vintage trucks and cars. I spotted this old 'International' parked in a Newport Beach neighborhood and was attracted to its bold exterior shape, turquoise color, and original rusty patina. I have painted this same truck en plein air, as well as, created studio versions in various sizes, and a commission for the owner. This was my first attempt at creating a nocturne. Parked directly under a streetlight, I was drawn to the flickering night-lights as cars drove by, the perfect composition to paint and a wonderful addition to my vintage truck and car genre."

"As a plein air painter of urban settings, I look for backlit buildings and objects that have the potential to create dynamic compositions. 5 O’Clock Shadows is a prime example, where the angle of the afternoon sun backlights the building and statue elements. Since the objects are in silhouette, they are simpler to draw and paint. In this painting, I aim to achieve an atmospheric glow. I prefer to suggest a few architectural elements and leave the viewer room for interpretation."

"I live in San Francisco and often visit the Golden Gate Bridge. I like the strong light and shadow effect of the bridge at dusk. I chose this angle to make the bridge more spectacular."

"I love neon, especially neon that depicts figures and objects. During the daytime, I find turned off neon particularly interesting. This club is located in a beautiful blue tiled deco building in Downtown Oakland."