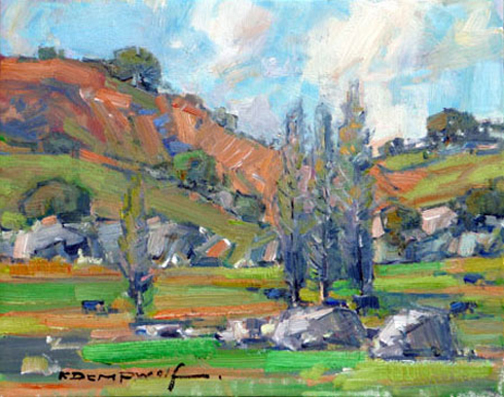 CAC Signature Artist  “Karl Dempwolf spent his childhood growing up in the picturesque Bavarian countryside but at the age of fourteen he and his family immigrated to the US on the Steam ship America. Dempwolf received his BA from California State University Northridge CA, where he will always be recognized as that institution’s first All American Athlete.

Dempwolf continued his art education by attending Art Center College of Design in Los Angeles, and the University of Southern California, getting his Masters degree in 1974. Also in 1974 he won the coveted CINE Golden Eagle award for his film, “The Story of a Craftsman”. The same film also won the Silver CINDY award and Best of Show at the Bellevue International Film Festival in Washington. His film career ended when painting became his passion. Wendt , Rose ,Puthuff Payne and Ritschel became his artistic icons.

Over the years Dempwolf has participated in exhibitions at the Museum of Science and Industry in Los Angeles, the Frederick R. Weisman Museum at Pepperdine University in Malibu, the Phippen Museum in Prescott AZ, the Carnegie Art Museum in Ventura  County,  the Bowers Museum in Santa Ana CA. California, and the Pasadena Museum of California Art.

Dempwolf’s work can be found in publications from North Light Books, entitled Art from the Parks. His paintings are in the permanent collections of large corporations, among them McGraw-Hill Publishers, and the National Park Foundation. Dempwolf’s newly published book ” A Painter’s Journey” is available on this web site.”

Your entry fee will get you a seat to watch the demo and free refreshments form the studio bar.

For more information, please go to the CVA website:  https://www.carmelvisualarts.com/