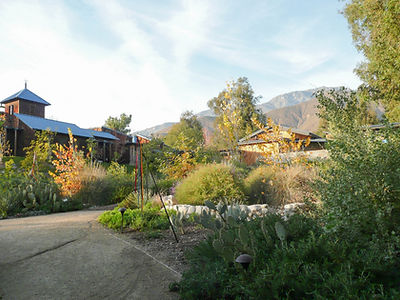 The Inland Empire Chapter is hosting a paint/sculpt-out at the Maloof Foundation located at 5131 Carnelian Street, Alta Loma, CA 91701, on Saturday, November 5, 2022.

The Maloof Foundation
In 1990, the Maloof residence and woodshop were deemed eligible for the National Register of Historic Places. With the longplanned Foothill Freeway extension set to cut through the Maloof site, negotiations began to save the buildings by moving them to a nearby location. The original location was a working lemon grove and the new six-acre site was chosen partly for the existing lemon trees that recall the original environment and complement the new landscaping.

Today the relocated residence is open as a living museum. Once again, each room is filled with treasures that give this unique home its spirit. The woodshops were moved to the new site, as were many of the trees from the former Maloof property. The landscaping consists of a natural garden of water-wise California native plants and compatible plants from other Mediterranean climate zones around the world. Benches, sculpture, and picnic areas offer spaces for visitors’ quiet reflection and relaxation. Sam Maloof is acknowledged as one of the finest woodworkers of our time. As a leader of the California modern arts movement,
he designed and produced furniture infused with profound artistic vision for more than half a century until his death in 2009.

Maloof’s work was the subject of a prestigious retrospective at the Smithsonian American Art Museum’s Renwick Gallery in 2001 and is part of their permanent collection. His furniture is in some of the most important private collections in the nation and the permanent collections of the Boston Museum of Art, the New York Metropolitan Museum of Art and many other fine museums. In 1985 he was named a MacArthur Fellow and later received honorary doctorates from the Rhode Island School of Design and other institutions of higher learning.